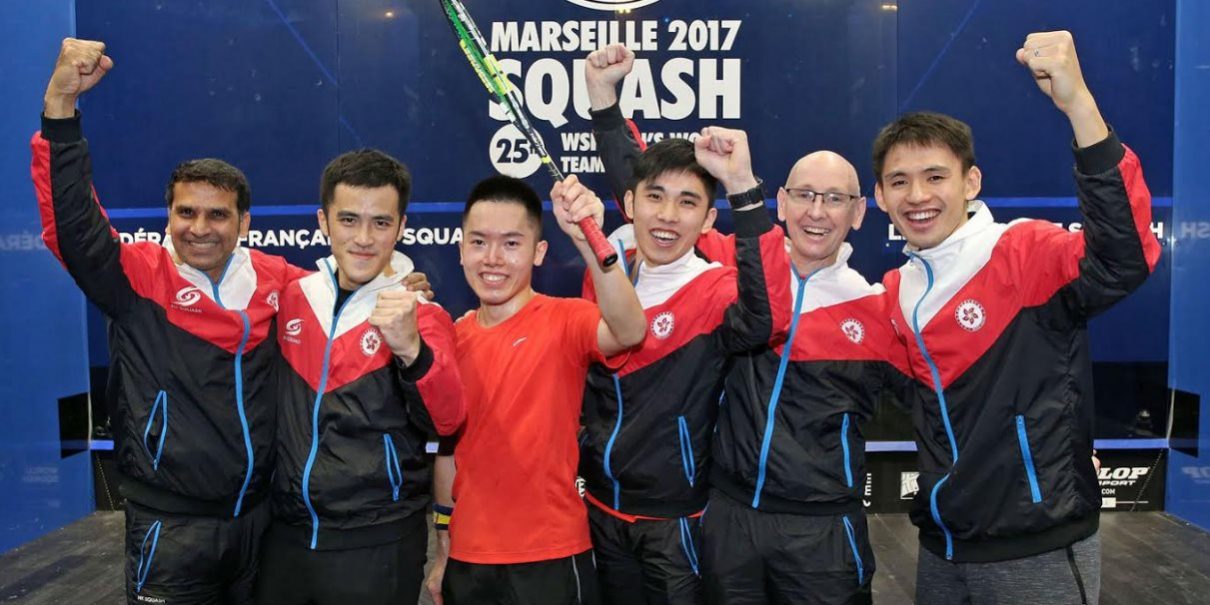 A dramatic quarter-final day in Marseille, although it started calmly enough as top seeds Egypt and England won through to the semi-finals with 3-0 wins.

Read on for the details …

Karim Abdel Gawad gave top seeds Egypt the lead as he took three well-contested games against Alan Clyne. The Scot battled back from 6-10 down in the first before Gawad took the lead, and was in contention up to 6-all in the next two games before the Egyptian acclerated away.

“It was important to get the win to put the team ahead,” said Gawad, “you can’t afford to drop concentration against Alan, like you saw in the first he’ll always come back given the chance. Glad to get through that and hopefully the team can win …”

In a similar fashion to England’s match, the match war wrapped up quickly as Ramy Ashour raced through the first game then held off Kevin Moran’s improvement, and Marwan Elshorbagy took the dead rubber.

“We’ve been taking this seriously from the first day,” said Ashour. “We have a great squad, great team management and great team spirit. There’s pressure, yes, but we’re enjoying it and looking to go through to the final.” 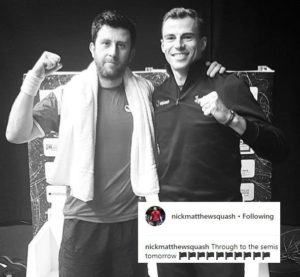 Nick Matthew got defending champions England off to a winning start, but but for the first time in his meetings with Indian number one Saurav Ghosal, he needed five games to do it.

Matthew twice took the lead only for Ghosal to level, and the decider was close all the way, until on his first match ball Matthew appealed a let decision which was overturned into a stroke.

“I sometimes forget my age and try to play like I could a few years ago,” said Matthew, “but I can’t play that fast all the time now. Apart from Olli [Tuominen] I’ve probably got the most experience of anyone here, and I need to use that, like saving my review until match ball!”

Daryl Selby confirmed England’s place in the semi-finals as he eased past Harinderpal Sandhu in straight games, and James Willstrop took the dead rubber.

“Nick had to dig deep but got a very important win in,” tweeted Selby, “and I managed to play well to close out the match and move us into the semis.” 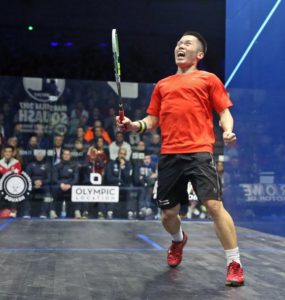 The hosts took an expected lead as Gregory Gaultier beat Max Lee in straight games, although it wasn’t without drama – at the end of the third it seemed that the Frenchman had won 11-9 but it transpired that the referee had missed a point for Hong Kong! Play resumed after a 10-minute break, but it only delayed the result momentarily though as Gaultier finished it off 12-10.

The French train was halted – at least momentarily – when Yip Tsz Fung turned in one of his best performances, coming from 1-2 down to beat Mathieu Castagnet and set up a decider.

It was Leo Au who completed the upset of all upsets as he beat Gregoire Marche in front of a packed, and stunned crowd, easing through the fourth 11-2 to confirm Hong Kong’s best-ever finish and a disappointing day for the hosts, who fail to reach the semi-finals for the first time since 2001.

“It is a very special achievement for Hong Kong,” said 27-year-old Au. “We put a lot of effort into our preparations for this and really wanted to do well here. The crowd was really behind France, but I had my team-mates in my corner and that helped me a lot.” 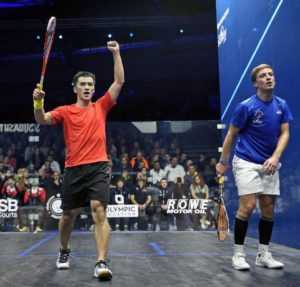 Chris Robertson, who only took over the mantle of Hong Kong national coach a few months ago, was understandably delighted with his team’s success:

“It all started when Max was 2/0 down in the first match, during which time he had been outplayed by Gaultier. “He then showed a lot of character to take the third game to a tie-break – and, even though he lost, this gave confidence to the rest of the team.

“When Tsz Fung was 2/1 down in his match, I said to him that he needed to stay calm and trust his skills – and he kept up the pressure in the fourth and fifth and won. Leo is in good form and he handled the pressure brilliantly in the decider.

“We are really delighted with this success, but we want to build on this, going forward. They’ve created history already – but we can relax now when we play Egypt tomorrow.”

The opening match in this trans-Tasman encounter looked on paper like a tough one, and so it proved as Paul Coll finally got the better of Ryan Cuskelly in 97 minutes – the longest match of the tournament to date – to put New Zealand into the lead.

“We beat one of our great sporting rivals tonight and we now face another one tomorrow,” said Australian team manager Paul Price. “We’re ready to throw everything we’ve got at England to beat them!” 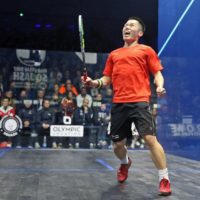 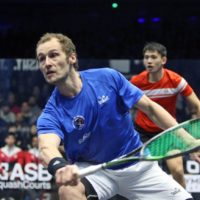 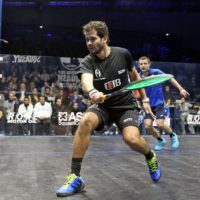 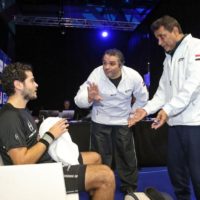 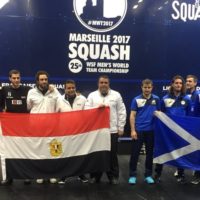 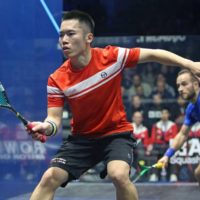 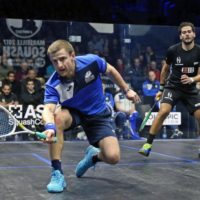 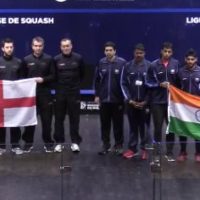 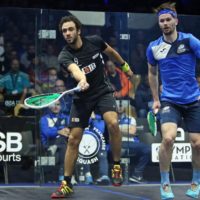 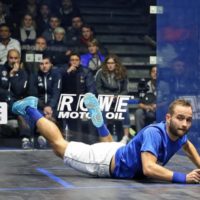 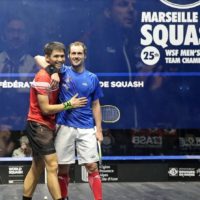 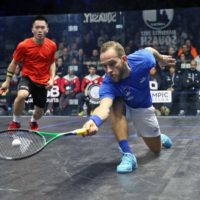 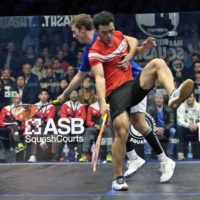 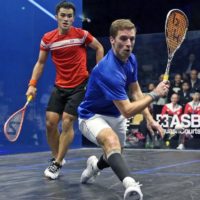 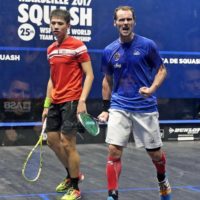 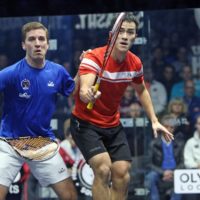 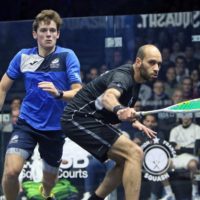 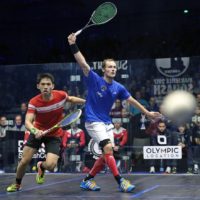 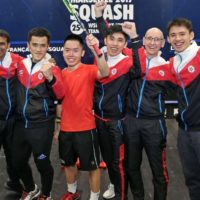 PREVIEW: Four Continents in the Quarters

Defending champions England start proceedings against India – who redeemed themselves yesterday after a loss in the Pool rounds.

In the evening session it’s a trans-Tasman battle as Australia and New Zealand lock horns with the Kiwis in the quarters for the first time in 22 years and the Aussies looking to reach yet another semi-final.

At the same time hosts France, very impressive so far, continue their bid for a first title as they take on Hong Kong who are seeded for a highest-ever finish.

The seedings predict wins for England, Egypt, Australia and France, and while we’re not betting against that, there’s sure to be some drama along the way …