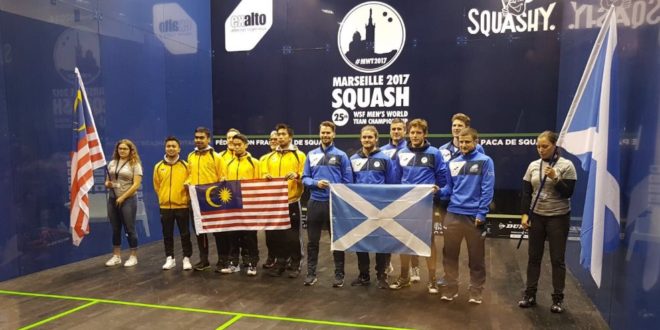 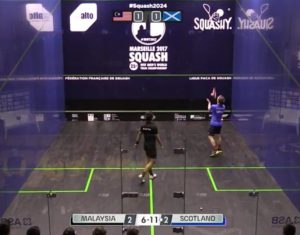 The first day of knockout matches in Marseille saw seven of the top eight seeds progress to the quarter-finals, with Top seeds Egypt, England, France and Australia all winning 3-0.

Eighth seeds India recovered from their Pool round loss to Malaysia by knocking out seventh-seeded Germany, while 10th seeds Scotland won a dramatic final match of the day to deny 9th-seeded Malaysia a place in the quarters.

Round ONE Knockout Matches 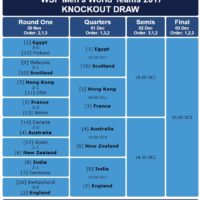 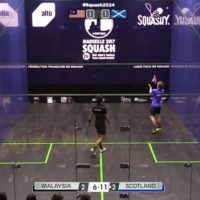 A close match looked in store as the 9th seeds took on the 10th at the end of a long day in Marseille, and so it proved.  Greg Lobban put Scotland ahead with a tough 3-1 win over Eain Yon Ng, then Nafiizwan Adnan levelled in a see-saw five-setter against Alan Clyne.

The decider went one way then another, and with 1000+ watching on YouTube it was Dougie Kempsell who finally claimed the win for Scotland (on St Andrew’s Day, no less), beating Mohd Syafiq Kamal to put the finishing touches to the last eight.

“Great mood in camp and we are looking forward to the Quarter Finals tomorrow,” tweeted Lobban. Scotland now face … Egypt.

Hosts France went through to the quarters, as expected, but Wales made them work for it despite the 3-0 scorelines. Peter Creed didn’t do a lot wrong against an impressive Mathieu Castagnet, and Joel Makin pushed world #1 Gregory Gaultier hard, the Frenchman relieved to get off in three after a 54-minute battle. 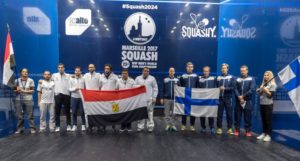 Top seeds and hot favourites Egypt were back in action, against a Finnish team resting its top player in Olli Tuominen. Facing the Aijanen brothers, Ali Farag put Egypt comfortably ahead in the opening match and Karim Abdel Gawad recovered from a typical slow start to give Egypt the win an a place in the quarters before Marwan Elshorbagy wrapped up the dead rubber. 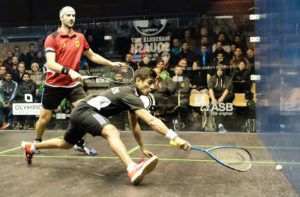 Germany 1-2 India :  A mini-upset goes the right way for India

Having lost out to 9th seeds Malaysia in the Pools, 8th seeds India were up against 7th seeds Germany – who were without their usual #2  Raphael Kandra due to illness  -for a place in the quarters.

Vikram Malhotra quickly put India ahead, and Saurav Ghosal pushed Simon Rosner to five games before the German levelled the match. Mahesh Mangaonkar was in control in the decider as he took India through to a quarter-final meeting with England.

Indian National Coach Cyrus Poncha said, “Absolutely delighted. It was a great team effort. The boys were all charged up. The result showed it.”

A full strength HK team, under the helm of Chris Robertson, are still on course for their seeded best-ever finish after a narrow win over USA. Leo Au put Hong Kong ahead but Todd Harrity levelled the match for the US with an impressive win over Max Lee. Tsz Fung Yip got the better of three close games against Chris Hanson to take Hong Kong through. 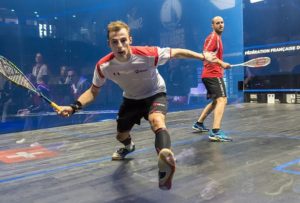 The defending champions beat the Swiss 4-0 in this year’s European Teams, but were almost taken to a decider today. James Willstop put England ahead with a comfortable 3-0 win over Dimitri Steinmann – who was last off court last night – before Nicolas Mueller stormed to a 2-0 lead over Nick Matthew, firing in winners at will.

Matthew was 7-8 down in the third, but found the necessary to pull that game back, and was always in front in the final two games as England moved through to the quarter-finals.

“A win’s a win’s a win,” said Matthew on Twitter. “Not our sharpest team performance today but credit to the Swiss for a really tough battle playing the dead court conditions really well. Hopefully a tough first round to sharpen us up for the rest of the event.” 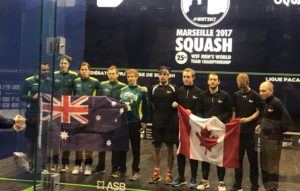 The Aussies, ever-present in the MWT, are used to reaching the final stages of the competition, and moved through to another last eight appearance.  In the opening tie Cameron Pilley beat Shawn Delierre –  a repeat of their 2007 meeting – in straight games, and Ryan Cuskelly wrapped it up with a 3-0 win over Nick Sachvie.

New Zealand 2-0 Spain: Coll wraps it up for Kiwis

Spain, appearing at this stage for the first time since 1989, made New Zealand work for the win. Campbell Grayson beat Iker Pajares 3-1 in the opening match, then Paul Coll battled back from a game down against Borja Golan, taking the lead after 70 minutes and wrapping it up 11-1 in a quick fourth game – New Zealand’s best MWT result for 22 years!

What they said – Day FOUR 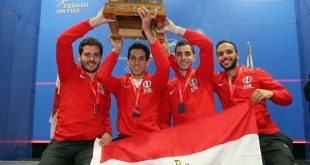 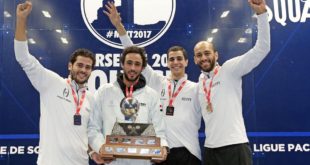 Top seeds Egypt reclaim the title from England on finals day in Marseille ...