After wrapping up the Squash Canada Men’s Team Trials in Montreal this past weekend, the squad set to represent Canada at the 2017 Men’s World Team Championships in Marseille, France, has been confirmed.

Nick Sachvie, Andrew Schnell, Shawn De Lierre, and Mike McCue will don the red and white when they hit the courts in France, November 26 to December 3.

A. Schnell and De Lierre emerged from the trials round robin format with 3-1 records, with McCue’s 2-2 standing notching the players’ team selection (see full match results).

2017 Canadian Squash Championship Men’s Open champion, Nick Sachvie of St. Catharines, ON, claimed his place on Team Canada by automatic selection earned by virtue of winning the Canadian Championship in May.  Capturing the Canadian title was the cumulation of a strong 2016-17 Professional Squash Association (PSA) season for Sachvie where he captured his first ever PSA Tour victory at the Life Time Minneapolis Open 2016 and then continued to win two more tour tournament titles.  Sachvie is Canada’s highest ranked male on the PSA World Tour at #65.

Veteran Shawn De Lierre of Montreal, QC, was a member of the gold medal winning 2015 Pan Am Games Men’s Team and is Canada’s longest active PSA World Tour player.  De Lierre has been a member of the Canadian squad at the past four World Championships and will look to draw on his past experience when he and the rest of the squad hit the courts in Marseille.

Like Sachvie, Mike McCue, of Toronto, ON, had a successful 2016-17 season on the PSA world tour as he cracked the top 100 for the first time in his career claiming #90 ranking.  His performances over the last 12 months have included making it to the finals of the Men’s Open at the 2017 Canadian Squash Championships, a first for McCue, and advancing to the semi-finals in five PSA world tour events.

David Baillargeon of Montreal, QC, will be the team’s non-travelling reserve after finishing 4th at the team trials.

“Nick had a breakout season on the PSA World Tour this past year and Mike, Andrew and Shawn had extremely solid seasons as well,” said Men’s National Coach, Yvon Provencal.  “Following an exciting and well played Team Trials event we are excited with Team Canada’s entry to the World Team Championship. I’m looking forward to seeing what the guys bring to the courts in Marseille.  Shawn and Andrew have represented Canada a number of times and I’m sure will be great leaders on and off the court for Nick and Mike, both of whom make their first appearance at a World event.  The Men’s World Team Championships offers us the chance to compete against the best players in the world and is our chance to show the world how Canadian squash is developing.”

The 4-member Canadian squad now begin their final training in preparations of the Worlds.  Under the guidance and direction of Provencal, the team will head to France where they will join 25 other nations competing for the world title. Canada looks to better their 11th place finish from four years ago, at the 2013 Championship.  The 2015 Championships were cancelled by the World Squash Federation after Kuwait was forced to withdraw from hosting the event several weeks out over the Kuwaiti Olympic Committee row with the International Olympic Committee, and a prospective replacement host could not satisfy security concerns of member federations.

ALL THE TEAM ANNOUNCEMENTS 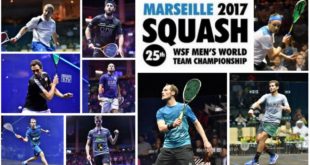 News of the squads for the 2017 WSF Men's World Teams in Marseille ...