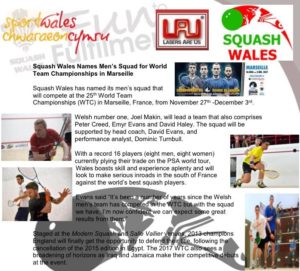 Squash Wales has named its men’s squad that will compete at the 25th World Team Championships (WTC) in Marseille, France, from November 27th to December 3rd

With a record 16 players (eight men, eight women) currently plying their trade on the PSA world tour, Wales boasts skill and experience aplenty and will look to make serious inroads in the south of France against the world’s best squash players.

Evans said “It’s been a number of years since the Welsh men’s team has competed in the WTC but with the squad we have, I’m now confident we can expect some great results from them.”

Staged at the Modern Squash and Salle Vallier venues, 2013 champions England will finally get the opportunity to defend their title, following the cancellation of the 2015 edition in Egypt. The 2017 WTC also sees a broadening of horizons as Iraq and Jamaica make their competitive debuts at the event.

Two French Federation all-glass showcourts will be used to provide optimum viewing for live spectators as well as accommodating a global audience through international broadcasts – which will look to elevate the event onto a level comparable with previous successful WTC events in Nimes, Mulhouse and Paris.